My great friend and Tibetan nephew, Gonpo, died today, at age 41. There’s no big message here, just sadness. Of course we could discuss the three diseases he died of, and the state of health facilities on the Tibetan plateau. But today, only sadness.

I met Gonpo in 2002, when i first traveled to Tibet with Kilung Rinpoche, Gonpo’s uncle. He was one of many monks who were so curious to meet me, curious and warm-hearted. Gonpo stood out as incredibly open, forthcoming, energetic, and wonderfully hilarious. 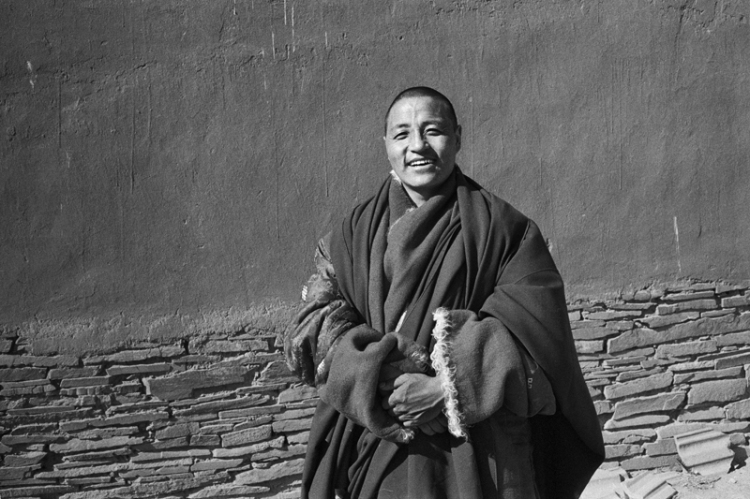 He had a strong baritone voice that emanated from deep inside, like a lion. Later on that trip, some of us traveled from Dzachuka in the east, to Lhasa in the center of Tibet. And there Gonpo revealed himself as a protector, willing to do whatever it takes for someone in need. In this case, me.

Our small group had been planning to circumambulate Mt Kailash. But something had come up for me, an interpersonal thing with one of the westerners going on the trip, and i felt i could no longer go. I was in tears explaining it all to Rinpoche, with Gonpo sitting there listening to this in English, not comprehending the words, but the meaning. All at once, he looked at Rinpoche and said in Tibetan, he would forgo the trip—his chance to make the lifetime Kailash pilgrimage—in order to stay with me. Can you imagine this? Further, he had a duty, in a way, to stay with Rinpoche as his attendant. Understanding all of this, I was deeply touched, and will never forget his offer. Of course I declined. Tears, yes, but i knew i would be okay, and didn’t wish to be the cause of such a sacrifice.

There were more trips to Tibet and more meetings and adventures with Gonpo. I watched him once in a passionate fight with his brother, thinking one of them was going to kill the other—Gonpo was interrupting some alcohol-driven action of his brother, and his brother had a large knife—again, Gonpo as protector.

Every westerner we brought with us to Dzachuka was charmed by Gonpo in his imp manifestation, including the time he reached through an open window and smeared a female relative’s face with a huge handful of cake frosting. He was often the cause of belly laughing.

I watched him mature, taking on increasing responsibilities at the monastery. He was a doer, with this combination of fearlessness, big-heartedness, and capability. He was his uncle’s right-hand at the monastery, and indispensable for his family and community.

So, in 2009, when I was in India with extra weeks on my hands, his uncle asked me to help Gonpo, who had crossed the border to seek medical treatment. Of course I said yes. I became his advocate at the hospital, with doctors and medical technicians, and I learned how to navigate the health system in New Delhi. After the main treatments were completed, together with his cousin, we three made a pilgrimage up and back to some Himalayan destinations. And Gonpo and I continued looking after each other all along the way. When i put them on a bus in that hot, dusty Delhi parking lot, headed back home to Tibet, I didn’t know that would be our last meeting.

I thought Gonpo had been cured—of two diseases, Hydatid disease and Hep B —in China and in India. But no. More recently add to that a third, TB. You can look up the first one. Difficult. Dzachuka has one of the highest incidences per capita in the world.

Even though he went out of this life too early, Gonpo lived well and completely. He was beloved by countless people, including that brother of his, who did recover himself, now settled down with wife and kids.

I remember one time in my thirties, saying to someone, a stranger on a bus, “I’ve lived so fully at this point, if i were to die tomorrow i’d feel satisfied.” I think Gonpo could say this, too. Yes, young, but a beautiful life, a beautiful being.

He’s being honored by Kilung Monastery, his body being brought into the sacred space there, prepared for a lama’s cremation.

8 thoughts on “Gonpo, the Lion Hearted”